What is Amber Rose? 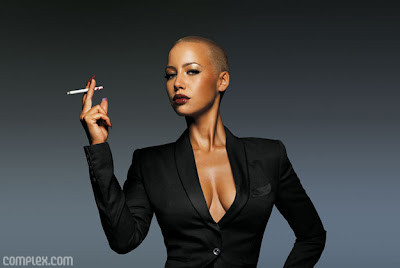 Mercedes Benz Fashion Week kicks off next week with the Michael Angel show. The fashion will be hot but the accessories will be even hotter. The most talked about accessory will be Amber Rose. The tall female with the blonde buzz cut will be the boldest piece that will furnish Kanye West’s look this fall. With boobs hanging out and her pout polished a dark shade of crimson, Rose will take the place of the Jesus necklace.

Just a few months ago, Rose was a little known bi-sexual stripper and exotic dancer. Her credits before meeting West included appearances in some music videos and a gynecological spread she did for Smooth magazine. By her account she met West after she was hired to appear in one of his videos. The two developed a bond over the course of the shoot and that bond has been nurtured into a relationship.

At first, Rose seemed like a joke, another of West’s publicity stunts, one of his incessant failed attempt at attention. Then he took her to the Metropolitan Museum’s Costume Institute Gala. That was a big deal. Is Rose West’s muse; his little human mannequin that he could exert over and dress up like a little Bratz doll? Perhaps she dresses herself up, but she so expertly channels the bane of West’s ideals.

She’s been referred to as an android from outer space and by other not-so-flattering adjectives, but whatever the case, it seems like Rose’s fifteen minutes just started and could probably be extending into an hour of pained fame whoring.

Rose is certainly a hip-hop fairy tale. Kanye, modern day fairy godmother. How does one go from being a dancer at Delilah’s Den, a famous strip club, to the arm of West? Not that West is celestial that a girl like Rose cannot desire or have him or vice-versa, but she gives new life to the hundreds of opportunists who are looking to score an athlete or entertainer and squeeze out a celebrity offspring.

Like her lover, Amber has a penchant for outlandish clothes. She’s been spotted wearing leopard print leggings, extremely short shorts, Doc Martens, and her signature dark glasses. But she went the clothing optional route this summer when she showed up on a beach in Miami naked save for the barely there thongs she had on.

By all accounts, Rose is a fame whore. While she sunbathed topless on the beach, her beau West was fully clad in clothes. As Rose tried different poses for her adoring fans and the paparazzi West doled out scowls and gave the finger to a camera hugging human at some point.

Rose is a departure from West’s previous public relationships, the first with Brooke Crittendon, which supposedly ended over a botched MySpace war and the most recent with Alexis Phifer, the designer to whom he was briefly engaged.

Rose breaks the mold, not just in her personality but also in her appearance. She is a stark departure from what had seemed to be West’s preference for darker skinned moderately tame women. Rose has got both bite and bark in her and she's been vocal about whom or what she is. Never shying away from the camera, Rose might be what Kanye always wanted but was afraid to go after.

Could Mommy Dearest’s presence have been a deterrent? Without doubt, because it seems unlikely that Kanye would have brought anyone the likes of Rose around his mother while she still lived. Yeah, it’s old news that she is probably rolling in her grave, but Rose could care less, this is the stage she’s always wanted.

Is Rose just a fad or has she come to stay?

Might Rose become a classic like Ray-Ban wayfarers or is she going to take on the quality of those pesky colorful resin jewelry that never just seem right. Always tacky and overdone. Or will she become a refreshing staple that never goes out of style?

She is fun to watch because she keeps her look interesting. She is also raw and speaks her mind (when she does speak), a marked departure from most fame whores who often come off as robotic, constantly looking for the always elusive right words. West too doesn’t seem to care about public opinion anymore. It’s as though he’s found his soul mate in Rose. She is his fashion equivalent and seems to be just as brash as he is.

Paradoxically, Rose is one of those girls that West can’t stop singing about. The gold digger girls who ride on the coattails of athletes and singer types like West, riding them into fame and fortune. Already, Rose has scored a modeling contract by association and who knows what else she has planned to get out of the relationship before it’s all over, if ever. West’s always been prophetic, he foretold the coming of Rose, review his lyrics for his anthem Gold Digger, or better yet those for Stronger:

So the time’s probably right, for West has scored his blond whatever she is. Rose is loving the limelight, and could care less. The rest of the world can jump off a cliff. West’s loving it and doesn’t give a damn.