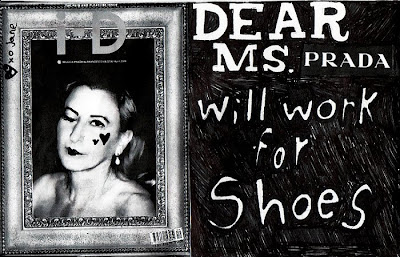 Pretty much sums up what I'm thinking right now...
Photograph courtesy of sea of shoes.
Posted by HRenaissance at 4:49 PM No comments:

Email ThisBlogThis!Share to TwitterShare to FacebookShare to Pinterest
Labels: Jane Aldridge, Sea of Shoes, Shoes on my mind

Only Champions Understand that Look 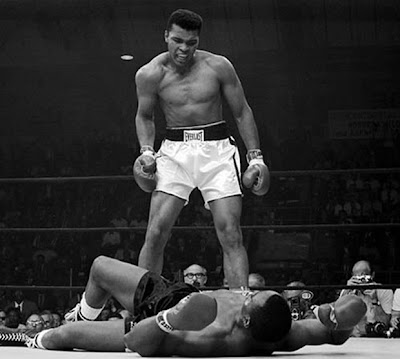 Photograph courtesy of the Kanye blog.
Posted by HRenaissance at 8:34 PM No comments:

1. New Year's Eve, South Beach, January 1
The numero uno spot for 2010 belongs to the New Year's Eve celebration going down in South Beach. What better way to bring in the New Year than with great music, good drinks, and festive people? The night will be filled with open bars, champagne toasts and celebrity hosts. Maxim magazine rates Miami as the number one party city and certainly the place to be to bring in the next decades in the new millenium. Miami is giving a party so large that clubs in South Beach actually have a website with a ticker counting down to the new year. The parties are going to be hosted by some of Miami's hottest party spots, including Mansion, Set, Louis, Cameo, and Wall. To find out more about the hottest party for NYE visit South Beach's own countdown to party website here.

2. Passion :: Twenty-Ten, Atlanta Georgia, Philips Arena and Georgia World Congress Center, January 2-5
But the party doesn't have to end in Miami does it? The next top destination for the new year is the Passion 2010 conference sponsored by Louis Giglio and the Passion Network. The Passion Network and Louis Giglio exist for one reason; to spread the fame and the name of the only one who matters the most, God. If you've ever visited 7:22, the mega Bible study of almost three thousand young adults that was initially at North Point Community Church and then finally at the Buckhead Church, you'll understand why this event must be tagged in your PDA or marked on your calendar under "must attend." Louis will be speaking and he always has a fresh word from God. Never stale. He's like the guy next door who wants to draw you into an intimate relationship with the Master. Registration for the event starts at $179 through December 1, 2009 but will be $209 at the door. The speakers and performers besides the inspiring Louis Giglio are Matt Redman, John Piper, Charlie Hall, Chris Tomlin, Andy Stanley, Fee, Francis Chan, and Beth Moore amongst others. Information about Louis Giglio and the Passion Network can be found by visiting their website.

3. Sundance Film Festival, Park City, Utah, January 21-31
One of my all time favorite film festivals rolls through Utah, for an exciting eleven days. For anyone who's about as crazy about indie films and great movies and documentaries, Sundance is the place to be. Think about Sundance as not just a place to peruse what movies might be contenders for awards and such, but see it as a prelude to fashion week. Sundance is the place to strut glamourous boots and those furs that will certainly drive PETA wild. The line up for the movies that will be showcased will be launched in December, so keep checking their website for more updates.

4. Mercedes Benz Fall Fashion Week, New York, February 11-18
For those still recovering from spring fashion week, there's more to drool over as fall fashion week takes over Bryant Park for one week plus a day. The line up as always is very exciting and promises to deliver on what trends will be hot in the fall of twenty-ten. At spring fashion week just a weeks ago, the hottest accesory of course was the Amber Rose, something Kanye West wears frequently like an amulet. Hopefully, Amber will be there to spice things up again under the tents come February. The line up of designers has not been published yet, however, registration for the event begins December 7th.

5. 82nd Academy Awards, Los Angeles, March 7
Next year, the Oscars will be moving to March instead of late February, to avoid competing for ratings with the Winter Olympics taking place in Vancouver. The hosts for the awards ceremony will be Steve Martin and Alec Baldwin. Although Baldwin and Martin make a remarkable comedic team, they score low marks on the sex appeal radar and pale in comparison to the previous host, the uber sexy Aussie, Hugh Jackman. Nonetheless, the hopefuls in all categories will be fierce. So far, the pictures generating tremendous Oscar buzz are Lee Daniel's movie "Precious" starring Monique, Gabourey Sidibe, Paula Patton, and Mariah Carey. Other notable mentions include Quentin Tarantino's "Inglourious Basterds," The Princess and the Frog, Public Enemies, The Lovely Bones, Up, A Serious Man, Amelia, Coraline, Pedro Almodovar's "Broken Embraces," and the Clint Eastwood epic about Nelson Mandela starring Morgan Freeman. The Oscars are my favorite award and I can't wait until I actually make it to the red carpet at the Kodak Theatre.

6. SXSW 2010, Austin, Texas, March 12-21
The biggest media event comes to honky tonk country, Texas! South by Southwest rocked the socks off Austin this year and 2010 will be no exception. The buzz generated by the event this year was incredible. The performances and the showcases were top notch. Southwest is the ultimate destination to showcase music, films, and other interactive media. If I don't make it to any other event, I need to make it to SXSW 2010.

7. Kentucky Derby, Churchill Downs, Kentucky, May 1
There's nothing like the Derby to bring out the belle in any well heeled southern lady. The Derby has become more than about horse races. The races while exhilarating are secondary. The fashion at the Derby takes the cake. The outfits are glamourous and the hats well perched atop the heads of the ladies are even more glamourous. The history of the Derby is quite interesting and worth studying for anyone interested in horses and horse racing. The Derby opens the triple crown series. Following on the heels of the Derby come the Preakness and the Belmont Stakes. The book "Black Beauty" made me an avid horse lover. I may not make it to the Derby next year, but when I do make it to the Derby I will go in grand style.

8. World Cup, South Africa, June 11-July 11
Ole, ole, ole, ole...
Leave it to FIFA and the South Africans to throw the largest party of the summer. From Polokwane, to Durban, to Capetown, football teams from all over the world will vie for the World Cup title. The last title was taken home by the French, led by their captain Zinedine Zidane. Zidane, unfortunately received a red card after the bull type head butt, marking a sad end to what should have been a joyous moment. Hopefully, the event next year will be incident free. For those heading down to Zululand for the event, there's more than football to look forward to. There are great resorts, delectable food, amazing sights, great music, and an exciting night scene. But don't forget to be on your guard as the crime rate in South Africa is at an all time high and poverty is rife. Also, prepare to be shocked by the juxtaposition of great wealth against the poor shanty towns; the unfortunate legacy of apartheid. Either way, get some boboti, great South African local brew, and some grilled zebra and oh, practice the Mexican wave before you leave.

Deconstructing the shooting that occurred earlier today in Fort Hood Texas involves a lot. Was this a case of abuse of Second Amendment Rights, Jihad, untreated post traumatic stress disorder or just a case of outright brutality? Although the details of the shooting are still hazy, the known facts are that the primary perpetrator Nidal Malik Hasan a military psychiatrist walked into a readiness facility and opened fire, killing 11 and injuring 31 people. Hasan who was born and raised in Virginia is the son of Palestinian immigrants. From what is known, Hasan was a devout Muslim who embraced Islam after the passing of both his parents.

The ramifications of the attack are especially grave for Muslims living in the United States. Since the attacks on Manhattan on September 11, 2001, the discussion over whether moderate Islam exists has consumed the media and everyday folk in the United States. While it is still unclear if Hasan's motives were motivated by a Jihadist mentality, the fact still remains that he is a Muslim and this alone will lead many to conclusions that may not be altogether accurate. When the name of the killer got into the hands of reporters on Fox news, a comment was made about how the name of the killer explains a lot. Do actions of people like Hasan and Osama bin Laden decry the truth of moderate Islam, or should they be viewed as sociopaths like Timothy McVeigh and Eric Klebold. Either way, the issue of gun laws and gun control come into play, but who would consider gun laws for those who know all too well the danger of firearm abuse?

One thing is certain though, the mentality of shooting sprees is slowly becoming as American as McDonalds. Divorce, anger, betrayal, unemployment...open fire in public spaces and kill en masse. There is no other developed country that has the rate of homicide due to gun violence that comes close to that of the United States. Our culture has slowly become obsesively trigger happy and it doesn't seem like any action is been taken. Isn't it ironic that for a country where little boys are not allowed to paly with toy guns, there is so much gun violence? Just a thought, but if little American boys are allowed to play with toy guns will they be less obssessed with them as adults? Let's think about gun violence and our Second Amendment rights a little more. The killings are senseless and we do not need any more bloodbaths.
Posted by HRenaissance at 6:59 PM No comments:

Fame Kills: We Were Once a Fairytale 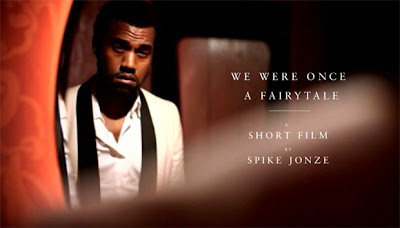 So yes, fame does indeed kill. I have a lot of thoughts on this video, Spike Jonze's directing, and Kanye's crazy antics. But for now, I'll let them stew. To watch the video, click here.
Posted by HRenaissance at 9:00 PM No comments: